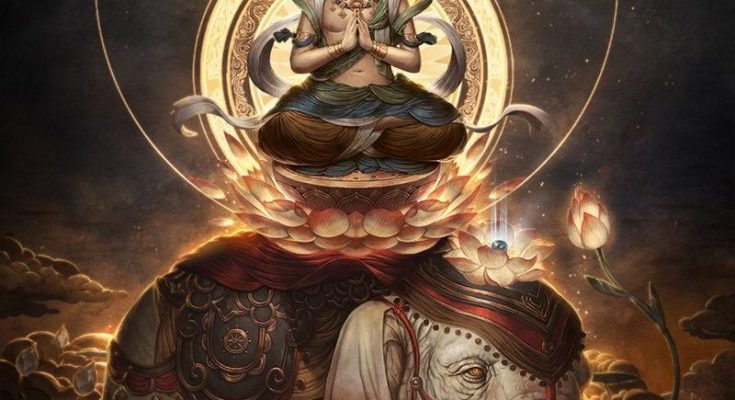 Like Manjusri, this bodhisattva was an assistant to Sakyamuni Buddha. The two bodhisattvas symbolize the Buddha’s emphasis on understanding (Manjusri) and practice (Samantabhadra). But whereas Manjusri was known for his unconventionally straightforward style of teaching, Samantabhadta’s primary concern centered on the conduct of regular Buddhists, that is, how they should put the Buddhist principles into practice Samantabhadra is also called the Great Conduct Bodhisattva, a name which reflects his practice of Buddhism through his famous Ten Great Vows.

All buddhas and bodhisattvas make vows. This is comparable to our set ting a goal when we want to achieve something and then heading in that direction. A vow is thus a buddha’s or a bodhisattva’s goal, the driving force behind his effort to reach his destination. Amitabha Buddha followed forty-eight vows and the Medicine Buddha twelve. The Medicine Buddha’s vows related primarily to helping others and improving the lives of all living creatures, and Amitabha Buddha’s vows emphasized the rebirth of these creatures into his Pure Land [each Buddha has his own Pure Land]. In other words, the Medicine Buddha focused on the current life and Amitabha Buddha was mostly concerned with life after death.

Samantabhadra made the following ten vows: (1) to venerate all buddhas; (2) to extol the Buddha, (3) to make offerings, (4) to repent his sins, (5) to do virtuous deeds, (6) to pr that the Buddha’s teachings will be passed on, (7) to petition the Buddha to remain in the world for a longer time, (8) to follow the Buddha’s teachings, (9) to live harmoniously with all living beings, and (10) to bestow merits on all living beings for their salvation.

The combination of seeking buddhahood or enlightenment for themselves (the first eight vows) and saving others (the last two vows) by helping them attain enlightenment is typical of the vows of bodhisattyas,’ Below I will give a short description of each vow.

The first vow, to venerate all buddhas, does not imply that they are creators or gods. Hence, venerating buddha by prostrating one self before his statue means to show respect to that buddha for his supreme wisdom and compassion. Therefore, it is of utmost importance that when prostrating oneself, one should be inwardly respectful to the buddha. Furthermore, one should be sure to venerate all buddhas, not just the one addressed at that particular time.

The second vow, to extol the Buddha, also means praising all buddhas. As Samantabhadra stated in the Hua-yen Sutra, there is an infinite number of buddhas in the universe. He praised them all for their great merits, but because the number of buddhas is infinite, his praises for them will also goon forever.

The third vow, to make offerings, means to offer such things as food, music, lamps or flowers to a buddha. However, the most meaningful offering is to practice the Buddhist teachings so as to benefit oneself and others. The merits gained from such practice are more valuable than those gained from offering material goods, because material goods do not last forever. Also, because the Buddhist dogmas free us from our suffering and repeated reincarnations, the buddhas will be delighted to know that their teachings lift people out of their misery. If we can help others solve their problems and free themselves from rebirth, we are happy, those people are happy, and the buddhas am happy. Therefore the happiness stemming from the practice of the Buddhist doctrine is the best offering to the buddhas.

However, when we make offerings, we must not think about ourselves, the givers. Instead, we should focus on the recipients receiving the offerings and the things that are offered. Otherwise it is not a true offering.

Samantabhadras fourth vow is to repent his sins. He stated that all of us have accumulated sins and wrongdoings stemming from our thoughts, words, or actions throughout our past reincarnations. Therefore, we should repent our mistakes before the buddhas or bodhisattvas in order to be cleansed from all impurities and filth. We should also vow not to make the same mistakes again.

With the fifth vow, Samantabhadra proposed to do virtuous deeds. Besides doing good deeds no matter how small or trivial they may seem, this vow included a willingness to sacrifice himself whenever necessary for the sake of others.

The sixth vow consists of praying that the Buddha’s teachings will be taught and passed on. To Buddhists, the Buddhist dogmas are very important because their very existence can free people from their misery and from the cycle of death and rebirth. Only as tong as the Buddha’s teachings are taught will Buddhism continue to exist.

The seventh vow is a petition to the bud- dims to remain in this world for a longer time. If the buddhas postpone entering nirvana and remain in the world longer, they can teach and guide more people. Since Sakyamuni Buddha himself has already passed away, we should chant his name. When we do so for a long time with full concentration, the Buddha will appear and live on in our minds.

The ninth vow is to live harmoniously with all living beings. There are all sorts of creatures: with and without legs, with and without wings, carnivorous and herbivorous. Since there are count less numbers of each kind, and they have various levels of intelligence. Living harmoniously with others does not mean complying with others’ desires to carry out illegal or wrong deeds, since this is not the Buddhist way. Instead, the Buddhist way requires us to encourage these living beings to do good deeds and to make them aware of what is right and wrong. The bodhisattva further stated that he would look after them, respect them, and be as attentive to them as he would to his own parents or even to the buddhas. Serving others means serving the buddhas. Since the buddhas’ compassion comes from observing other living beings and the vows to attain enlightenment come from compassion, it follows that the buddhas can attain enlightenment only if there are other living beings. If there were no other living beings, the bodhisattvas would be unable to attain enlightenment.

The last vow is to save all living creatures by accumulating merits. According to Samantabhadra, all the merits accumulated by means of implementing the first nine vows will be bestowed on all living creatures in the universe who as a result will enjoy eternal happiness and not succumb to illness or experience suffering. Samantabhadra also said that if any person suffered from his own bad karma, the bodhisattva would be willing to shoulder that bad karma on behalf of that person, who would then be free from suffering and attain enlightenment.

Like Manjusri, Samantabhadra is also some times depicted as riding an animal. Samantabhadra’s animal is an elephant with six tusks, which represent the Six Perfections (paramitas) or the six ways in which the bodhisattvas pursue their spiritual cultivation so that they may attain enlightenment and save other living creatures. The Six Perfections are: charity, following the precepts, tolerance, diligence, contemplation, and wisdom.

In Buddhism, charity is generally considered to have three aspects: material goods, encouragement, and the Buddhist teachings. Giving goods (including money) is to help poor people sustain their lives. The charity of encouragement means giving courage to people who have fear in their hearts. Encouraging a person who is afraid to do something empowers him and enables him to finish the task. The third aspect of charity means sharing the Buddha’s teachings with others, giving them an opportunity to learn to live calmly, comfortably, and in peace. It allows people to lead a different. We or to have a better understanding about life and the universe.

The second Perfection refers to following the Buddhist precepts (no killing, no stealing, no improper sexual conduct, no lying or impolite speech, no alcohol or drugs). These rules enable us to distinguish right or wrong and to avoid making mistakes or corn- miffing crimes.

The third Perfection is tolerance. When Suited, we tend to become angry and argue back. But what if we lose self-control and either hit the other person or return the insult but later regret having done so? We won’t need to worry about it i we have sufficient self-control and patience. Sometimes the whole thing may only be a misunderstanding. If we have patience and clarify the situation, it may be possible to come to a harmonious conclusion. Therefore, it is better not to react too quickly to apparent insults, Patience and tolerance may bring about a perfect ending.

The fourth Perfection is perseverance. If we want to succeed in doing something, such as learning a language, we must persevere. We must make a plan and follow it, so that we can make progress and reach our goal. If we are lazy and procrastinate, we will not succeed. Whether we want to understand Buddhism or learn other things, we must apply ourselves in order to be successful.

The fifth Perfection is contemplation. This does not simply mean sitting cross-legged with eyes closed, trying to clear the mind. That is only one type of contemplation. True contemplation means having a tranquil mind anytime and anywhere, even when walking or eating. With a tranquil mind, real wisdom will appear which will allow us to discern the truth behind everything and to tell what is right or wrong, true or false. A tranquil mind will also protect us from undesirable outside forces or influences, and it will keep us from doing wrong or foolish things which we might regret later.

The last Perfection is wisdom. Wisdom not only prevents us from making mistakes, but it also helps us uncover the truth behind matters. Through his wisdom, Sakyamuni Buddha discovered the impermanence of this world, and therefore he could leave us all his teachings that are based on that insight.

E-mei Mountain in China’s Sichuan Province has become the sacred site of Samantabhadra Bodhisattva. A Buddhist monk named Hui Chih went there in 399 a.d, and built a temple devoted to Samantabhadra. Additional temples were built later.

The Ten Great Vows distinguish Samantabhadra from other bodhisattvas. Although the bodhisattva made the vows for himself, we can take them as our own goals to help us do good deeds, be aware of our conduct, and atone for the wrongs we have committed. Through our efforts we may eventually reach our goal and free our selves from suffering and the cycle of rebirth. 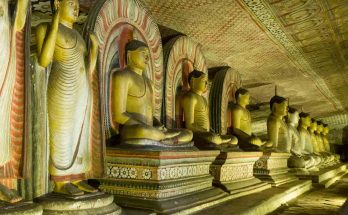 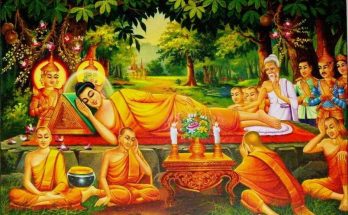